It was during a short-term missions project in the summer of 2004 that Tom first noticed a lump on the side of his neck.

Though he was sure it was nothing, a caring and persistent ear, nose and throat surgeon finally convinced him to have the mass removed. The results weren’t what Tom was expecting.

He felt a cool wind rush through him as the doctor informed him that he had cancer. As a 42-year-old man with a wife and three boys, he prayed to God for strength and answers.

Tom was diagnosed with aggressive, stage 3 follicular lymphoma—an incurable form of cancer—in January 2004. The cancer was found in his neck and in several places in his abdomen.

After a consultation with his oncologist, Dr. William Scott, and his cousin, Dr. Susan Cole, Tom and his wife, Lynn, prayerfully agreed to participate in a clinical trial. He would be one of 50 patients across the U.S. involved in the study.

Tom agreed to the clinical trial because it provided the best standard treatment along with testing a monoclonal antibody. After six rounds of chemotherapy, no active cancer cells could be found in his body.

“I’m so grateful to God that He chose to use a clinical study to help me gain healing several years ago,” Tom says.

“Even though the aggressive form of my lymphoma has returned five times, in each instance the cancer has been successfully treated. Today, many years after my initial diagnosis, my cancer is in remission.”

Today, Tom leads an active, fulfilling life. He enjoys his work as the Executive Editor for a global devotional, along with ministering to others through music and speaking. He plays basketball three times a week and teams up with his wife to direct a camp for families.

“God has used cancer to teach me valuable lessons,” he says. “My faith in Him and love for my family has only grown through the experience of facing it.” 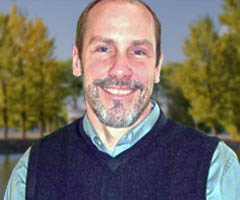