One glowing hot spot on a dark mammogram display screen changed her life one November day in 2009.

"Lymphoma" is a general term for a group of cancers that originate in the lymphatic system. A type of white blood cell goes rogue, multiplies and starts crowding out healthy cells and creating tumors.

The diagnostic phase spanned two months, from mid-November, 2009, until late January, 2010. It was the most difficult because it was shrouded in uncertainty.

Sue wanted to stay home in West Michigan near her support network during treatment. In sorting through options, she decided on what she considered the most aggressive: A national clinical trial offered locally through what is now the Cancer Research Consortium of West Michigan. In addition to the standard 6 rounds of chemotherapy, her trial included a nuclear medicine component as part of initial treatment.

After scans showed no evidence of disease in September, 2010, she was considered in a complete remission (‘cured’ was not a word that applied to the cancer and its pattern of coming and going with treatment). Her trial included 4 more years of “booster shots” of a drug to keep the scans clear (2 years was the standard).

"Cancer patients must have hope, and clinical trials offer many of us hope in a time of great stress and anxiety.

"For me, taking part in a clinical trial was a carefully considered leap of faith which offered the standard of care plus a powerful treatment option, generally unavailable, as part of frontline treatment.

“It's also a way to make a difference in future treatment options for those yet undiagnosed.”

The cancer hasn’t shown itself since 2010, and Sue is convinced it is because of her clinical trial.

She says the uncertainty of life somehow makes it all the sweeter. It shifts priorities, invites payback and gratitude for time and support, and sparks a commitment to make the most of every minute.

As a free-lance writer and editor, Sue collaborates regularly with Gilda’s Club of Grand Rapids by sharing members stories of resilience and hope through social media and her blog:

She is a member of the Patient Advisory Committee of the Cancer Research Consortium and advocates for clinical trials as an option every patient should ask about and consider.

For five years following  treatment, she wrote a weekly column on Living with Cancer for The Grand Rapids Press and its online affiliate, Mlive.com. An index of her columns is available at http://connect.mlive.com/user/sschroder/index.html

She also works at spoiling four grandchildren — three of whom were born AD (after diagnosis). 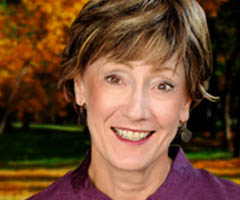