A man who walked three miles almost every day and enjoyed life, Pat Gavin was looking forward to retirement and traveling extensively with his wife.

Then, during a visit to his daughter’s home in Dallas, he began experiencing trouble swallowing and hoarseness. A few days later, when he drank anything, it began entering his airway, choking him.

Tests would reveal a rapidly developing cancer in the form of a large mass in his throat.

The “mass” was so large it blocked both his esophagus and trachea, kept him from swallowing and made breathing very difficult. Surgery was scheduled immediately to insert a tube so he could breathe, and a stomach tube so he could be fed.

Before the surgery, the doctors gave him some very sobering advice:

“Once we insert the trach tube you won’t be able to talk. Contact everyone in your family today, because after the surgery and depending on what we have to do for treatment, you may never be able to speak again.”

The tumor also had grown into his spinal column and was only 3 millimeters from his spinal cord. As a result, the tumor was inoperable.

“Well, what do you think?” his wife asked after the doctors left.

Pat’s answer: “It is what it is, now we have to deal with it and pray.”

Months later she would tell him that when she heard that, she knew he would make it somehow.

Pat’s oncologist recommended hitting the very aggressive cancer head-on with equally aggressive treatment. In addition to the usual therapy, he recommended adding a clinical trial involving two new drugs that were showing tremendous results against other types of cancer. The trial also involved radiation treatments at the same time as the chemo.

He was warned the treatment would be very hard on him, and he likely would require hospitalization before it was over. Despite it being a rough road, the doctor said it was the best one for Gavin, an otherwise healthy man.

Each clinical trial participant is assigned his or her own clinical trial nurse. Gavin’s nurse, Kathy, was with him through all the ups and downs. Today, he calls her his “tour guide to a miracle.”

After months of treatment, PET and CT scans, and a couple biopsies, Pat had a visit with his oncologist that he will never forget.

“We had the experience of witnessing a miracle,” the doctor said.

“We had drugs that worked, radiation therapy that worked, a patient with a great attitude and the support of a loving family and prayers from hundreds of people. Your tumor is gone, and your cancer is in remission.” 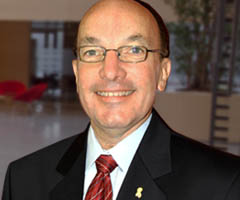