Ron developed back pain and thought he had hurt his back doing some heavy lifting. After a couple of weeks treating himself, he went to his primary physician, who began treating him for a strained back. After a couple of months of no real pain relief, Ron was sent for an MRI, which showed a problem with his left kidney. A CT scan showed a mass on the kidney, and Ron was referred to a surgeon and oncologist. A plant manager in the office furniture industry, Ron’s focus would quickly change.

In 2003 the left kidney was removed and Ron was diagnosed with Metastatic Renal Cell Carcinoma, Stage IV, with life expectancy of about two years. As there is no known cure for this type of cancer, Ron's best option was to take part in a clinical trial.

Ron enrolled in a Phase II Trial of 2 chemotherapy drugs. After six weeks another CT scan was performed and it showed the cancer was greatly reduced, almost completely gone.

“I continue to be on the clinical trial, now only taking the drug Tarceva in pill form once per day.  I continue to have very little side effects, and this is keeping my cancer in check.” 2018 marks his 15-year anniversary as a survivor.

Now retired, he plays golf with his two grandsons, works projects around his house and garden, takes several long trips a year with his wife, and savors each day.

Well beyond the roughly two-year survival rate when he was diagnosed in 2003, Ron volunteers his time to promote cancer clinical trials.

"The clinical trial has saved my life. It is giving me more time with my family and allowing me to watch my grandsons grow. One is now married and one is finishing college.” 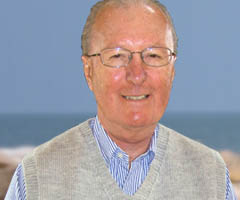